By the mid-nineteenth century, trains were making travel to seaside resorts like Cape Cod possible. Rail service reached Hyannis in 1854, and soon the mid-Cape became one of America’s most popular vacation destinations. The story of Craigville Village and the Craigville Retreat Center belongs to this earlier time. In 1871, land between Hyannis and Centerville was purchased by the churches of the “Christian Connection” in New England, as a gathering place for worship and spiritual renewal. “Camp Christian” opened in 1872—the same year Chautauqua was founded in western New York. The purchased land includes beachfront property on Nantucket Sound – Craigville Beach having a beach house, changing rooms and dining pavilion.

The Christians—as they preferred to be known—were a movement that sought to transcend the doctrinal differences between Christian denominations. Their basic principles included “the right of private judgment” and “Gospel liberty.” In 1932, the Christians united with the Congregational Churches to form the “Congregational Christian Churches”—a forerunner of today’s United Church of Christ.

For the first 15 years, a large tent on “Christian Hill” served as a meeting place for daily worship and evening band concerts. Families purchased small lots around the village, where they set up their own tents or built simple wooden shelters. In time, the tents became cottages, and a spacious Inn was built to accommodate guests. The meeting tent was replaced with the wooden Tabernacle in 1887. The Tabernacle has changed little since that year, and still features its original benches. 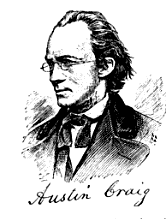 In 1881, “Camp Christian” was renamed “Craigville” in honor of Austin Craig, a progressive biblical scholar and minister of the Christian Church. As a theologian and preacher, Craig advocated for a non-dogmatic approach to scripture based on the rule of love. While the Craigville Retreat Center no longer belongs to a single denomination and serves all faiths, Craig’s inclusive spirit has animated worship and conversation in Craigville for nearly 150 years.

Had God no higher aim in giving you His Word than to put into your hand weapons with which to wage the bitter and interminable warfare of sectarian dogmatism?
Austin Craig

The non-profit Christian Camp Meeting Association (CCMA) was founded in 1872 to manage Camp Christian, and has remained in continuous existence since then. Today, the Association still owns the Craigville Retreat Center and other historic properties, including the Tabernacle, Inn, Manor, Lodge, Post Office and a number of cottages. CCMA works in partnership with the Craigville Cottage Owners’ Association. Under their stewardship, Craigville has been spared over-development that has overwhelmed other communities on Cape Cod. Thanks to the two Associations, Craigville preserves the unhurried spirit of a simpler time, and remains a place set apart for rest, silence and prayer and renewal.